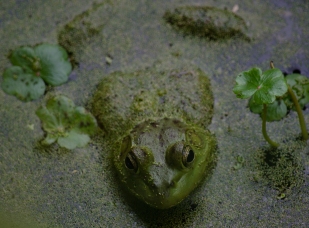 (Frog hangin’ out on his pad at the Nisqually Wildlife Refuge.)

I sometimes wonder about Emily Dickinson’s world.   A recluse who wore white and eschewed publicity, a prolific writer of untitled poems — here is a verse I find especially humorous:

How dreary to be somebody!
How public like a frog
To tell one’s name the livelong day
To an admiring bog!

What would Emily make of our world today?   Who isn’t croaking their name the livelong day, including moi?

The Boomers, the Millenials, the Gen-Xers — we croak everywhere in order to keep up with our public:  Facebook, Instagram, YouTube, Twitter.  And just when we’re current with one platform, another one pops up for distraction.   It’s become a game of whack-a-mole.

But is social media  turning us into hermits, albeit of a different kind?   Are we becoming techno-hermits tapping into our smart phones, i-pads, as we sit across from each other at Starbucks, no eye contact?

This is different from Emily’s retreat into self — she set the bar high and literature reaped the benefits of her hermitage.  Time and a lack of tools was on her side.

I realize I am privileged to have world-wide connection.  I am presently learning collage techniques on YouTube — but I can’t help but ask myself — Who am I?  Who is this person who feels compelled to post about Emily, who herself had her first book of poetry published posthumously in 1890?

Am I a dreary person for wanting to croak to the entire world on this blog before I croak?

Do I really want to be a Nobody?

I do not claim to be that humble.

Nor do I want to be Lady Gaga.  I guess I just want to tell my tale the livelong day to an “admiring BLOG.”

Hi.  My name is Gil.  I am a seagull who wised up to the world and this is the story of my travels.

First, a little background.   While still a hatchling in the nest, I used to tap on Mom’s beak for feedings.  The menu?  Vomit.  Seagull regurgitation.  Not exactly the variety my dumpster-diving siblings brought home:   chunks of pizza, French fries, Cheetos.  Once, my sibs even brought home parts of a deer leg.   They fought over it.  Screamed morning till night while I, the little hatchling, was still on a diet of Mom’s vomit.  I adapted, became used to these behaviors.  When Dad hung a shingle on our nest that said Safe Place, I believed it.

Still, after a few months I wanted to stretch my wings.  There was a great big world out there I wanted to explore.

As I soared in the clouds above my oceanic watering hole, I felt a rush from the tickling breeze and believed that the world was my oyster.  Forests, mountains, sea — it was all mine.

Suddenly a disciplined white air force of fellow gulls screeched and swarmed around me.  We were being dive-bombed by an eagle.   Shit bombs explode.  Danger, Danger, my amigos called out.  The raptor snatched a fellow-gull and carried him to the top of an evergreen.  I had evaded the eagle’s hungry eyes.

It was my first lesson in communication and cooperation.  Though we scream at each other — and at you human beings — we know there is safety in numbers.

Since I’ve mentioned humans, why do you folks act like we are snarky when we scream or go after the litter you drop?  Why do we have reputations as walking garbage dumps – we’ll eat anything that moves and a lot that doesn’t —  when you’re the ones tossing that hunk of beef jerky on the pier?

Did you ever stop and think that maybe you are the snarky ones?  To survive in the wild, yes I will even go after Styrofoam cups and cheese wrappers.

I need to come clean about that beef jerky.  I snatched it away from Peg Leg.  Peg Leg is a one-legged gull.  That’s right.  One leg.  I did not ask him how it happened.  No.   TMI.   All I know is that he was hobbling over to the beef jerky and I snatched it from him.   The peeps back home in the nest trained me well.  That’s the thing about sibling rivalry – it teaches you how to be bad-ass.   Man that beef jerky was good.

So with my fill of protein that day, I was flying high.  Maybe too high.  For suddenly, an amigo is cruising along with me in the fluffy clouds babbling to me about foreign object debris.  He points his beak at one of those proud birds with the golden tails.  You know – one of your human contraptions – a jet airplane.  He warns me about colliding with a plane’s windscreen, getting sucked into engines.  Really?

But hey, knowledge is power.  My trust in fellow gulls increases.  I dip away from the airplane, land on the beach to rest.  After a decent sleep, I spot a clam saying “Eat Me.”  I down it, but five minutes later puke it up.

A bummer, you say?  No.  A hidden talent that I would not have learned about if I hadn’t left the nest.  We gulls have superpowers:  we can sense paralytic shellfish poisoning before it’s too late.  Bet you can’t do that!

The brush with the toxic clam leaves me thirsty.  And so I fly over to my favorite watering hole:  the Pacific Ocean.  How many creatures do you know who can drink salt water and live to tell about it?  Sharks, crocodiles, maybe.  That’s gangsta, son.  Another instance of Gull Super Power.

I strut my stuff on the shore, fly over to some beach grass where I find a discarded lamb chop.   Thanks to your beach litter, I am learning your chops.

Sated and content, I fly to a tree limb to rest.  But as I tuck my bill into my feathers, I hear cries from a neighboring tree.  To my horror I witness a mature, fellow gull with a chick egg in his beak.  He just robbed a nearby nest of its newly hatched Gull.  I hear the delicate eggshell crack, and watch the mature one feast on its victim.

I thought I was gangsta, but this?

No.  This was just too much.  I suddenly felt yearnings for Mom.  And so I flew back that very night to the parental unit.  Is it true, I asked Mom.  Do we eat our own?

To me, this was a simple Yes/No question.  But not to Mom.  She would not give me a direct answer.  Instead, she regurgitated some of the same old pablum for me to gobble up.

“No.  From this day forward I call you Gull.”

As for my siblings?  They stared at me with the hungriest eyes I have ever seen.

Copyright Susan Romanenghi, 2017-2021.  I am an original, so please no rip-offs.   Excerpts & links may be used, provided that full & clear credit is given to Susan Romanenghi and Romanwink Galleries.