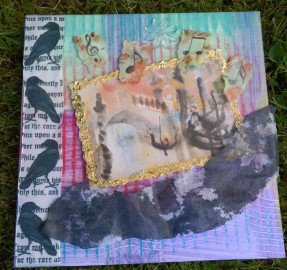 The trip to Venice still lingers in memory.  Luckily, we were not flooded.  La Serenissima floods 1/3 of the year.  It is a regular practice for them to set up ramps and you are advised to bring tall boots.

Here’s one of my unearthed poems:

Venezia leans and lists,
an ornamented, lacey, Byzantine eccentric
caught in the lagoons.

She is a jilted bride –
Miss Havisham in a yellowed wedding dress,
her Adriatic stanchions
rotting away
as rats nibble at the cake.

But Venezia refuses to stop the clock.
Her Bell Tower rings – cracked but hopeful.

In a café, the Italian slurps his zuppe di cozze,
downs another grappa,
sets fire to his brain as a musical strain
echoes from canals,
the boats of gondoliers.

I imagine the fire of his dream:
Venetian maids of yore
lie supine on the shore,
tresses fanning out in hues of gold, orange, blue.

Their siren songs set him aflame.

Until he returns to the 21st century,
spots a woman flocked by pigeons
at St. Mark’s Square.

And here’s YT, being flocked: 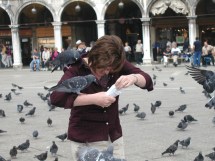 Copyright Susan Romanenghi, 2017-2020.  I am an original, so please no rip-offs.   Excerpts & links may be used, provided that full & clear credit is given to Susan Romanenghi and Romanwink Galleries.